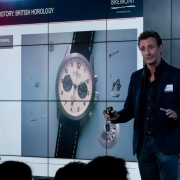 Nick English is the co-founder of the Bremont Watch Company, a company who brought watchmaking back to British shores to develop one of the most sought after brands in the industry. In his passionate presentation, Nick discusses how he and his brother grew the brand into the powerhouse it is today.

Build Your Own History

For Nick and Bremont, it is not about emulating others. Despite the fact that the Swiss have become the most well-known suppliers of watches in recent years, Bremont has always been driven by authenticity. When starting from scratch, Nick advises that you should try to build your own history, rather than co-opt someone else’s.

Dare To Be Different

When coming into a well-established market, dare to be different. Watch manufacturers have a showcase in Basel every year where brands can go and show off their wares. Nick and his brother decided to take Bremont down a different and unique route: hiring a townhouse in the UK and flying out all of those people they wanted to get in front of. Now, rather than competing against all the other brands at the show for 20 minutes with a journalist, they have a day or two to spend with all of the people they want to speak to, with the ability to introduce them to their team and factory. Another example is how they approach their brick and mortars, rather than recreating the watch shops they saw on the high street, they made stores that reflected their desired audience: adding a bar, making it feel more like a clubhouse.

The Power of Social

Bremont has never underestimated the power of social media, getting online when all the other brands considered it a vulgar practise. This allowed them to grow the brand much further afield in America and Asia for example.

Perhaps the most important thing for Bremont is customer satisfaction. It’s not just about “converting a customer”, but how you care for them afterwards. Make your customer feel immensely special, and especially in luxury retail, you have to make them feel like rockstars. Fundamentally, people connect with people, and tools like a CRM can help foster the relationship.

When it comes to setting up your own business though, Nick has 5 pieces of advice for you to bear in mind. Be Passionate. Be Authentic. Be Smart. Innovate. Tell your story.

Incubeta Ignite: The Future of Advertising

Incubeta Ignite: Changing Your Mindset
We use cookies to personalise content and ads, provide social media features and analyse traffic. Information about your use of our site is shared with social, advertising and analytics partners who may combine it with other information you've provided.OKDeclineLearn more
Scroll to top