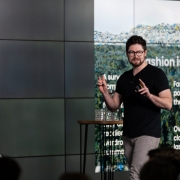 The fashion industry of late has gone through a shocking realisation. The realisation that it is, unfortunately, a dirty business. Statistically, it is one of the top polluters in the world: a survey from Sainsbury’s last year showed that 235m items ended up in a landfill as people switched to their summer wardrobe. The average piece of clothing in the UK lasts for less than 3 years before being discarded, with over 1m tonnes of new clothing being bought last year. We are constantly consuming stuff, and constantly throwing it away.

At NMPi’s latest seminar, Rob Herdman, Senior Global Manager – PR & Media for Napapijri, took to the stage to explain how they realised that they had a responsibility to change. The Italian fashion brand has an internal philosophy to address sustainability issues, which in turn frames a lot of their decision making. Called “Make it Better”, they focus on doing what they were doing slightly better year on year so they will eventually get to a point they can be happy with. Often, we try to act too quickly, and we can’t enact the change quick enough, or we end up doing things wrong. This way, Napapijri sets a goal for 3 years down the line and moves there step by step.

So far, they’ve removed fur, down, a lot of the chemicals that were once present in their jackets; and the next stage is to tackle the issue of massive waste. The fashion industry fuels this, wanting consumers to continue to go out and purchase new clothing, to change their wardrobe every 6 months.

The goal is now to go from Mass Production to Mass Customisation; shifting to an “on-demand” model where, rather than mass producing items to sell, products are only made when someone wants to buy it. This avoids all of the waste that comes when you don’t sell all of your stock.

Ze-Knit was the first step in that direction:

Napapijri changed the way they produced their clothing, moving to a technique called digital knitting which is very similar to 3D printing. Rather than stitching fabric together, you’re having a machine make a 3D model of the garment in one piece. This means they can cut out stages of the manufacturing process and thus reduce waste by up to 30%.

But this is just the start. Moving forward, the brand wants to make the customer more responsible as well. They’re already looking at ways of encouraging customisation, to produce exactly what the customer wants, only when they want it. If they succeed, the fashion industry will be turned on its head.

Download Rob’s slides: How to Succeed in Times of Change: Take Responsibility

Audio: Don’t Call it a Comeback

The Power of Adaptability
We use cookies to personalise content and ads, provide social media features and analyse traffic. Information about your use of our site is shared with social, advertising and analytics partners who may combine it with other information you've provided.OKDeclineLearn more
Scroll to top