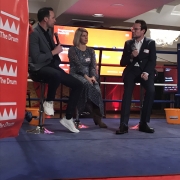 Yesterday, CEO Luke Judge joined the line-up of high-ranking industry experts at The Drum’s Programmatic Punch to face off on some of the biggest topics in Programmatic right now. Alongside Anna Forbes, UK General Manager of The Trade Desk, Luke answered questions from Justin Pearse, Partner of Bluestripe, on some of the business trends within the programmatic industry and the challenges still to overcome.

Whilst the advertising industry, and programmatic display in particular, has never had the cleanest reputation, and Marc Pritchard’s speech last year called out the lack of transparency within the programmatic space, on this panel the tone was much more optimistic.

It’s no secret that the programmatic display industry is complicated, and there is an overall lack of understanding about what goes on. The panellists, Judge and Forbes, agreed that Pritchard was right to call out those who were engaging in bad practises and to put out a call to action for the rest. However, they also rallied against some of the hyped rhetoric of the claims and sought to demonstrate that things aren’t as murky or even as fraudulent as some might claim.

Unsurprisingly, trust surfaced early on in the discussions as a central challenge still to overcome. While trust between both the consumer and advertisers, and between advertisers and agencies, has improved over the last year, it’s fair to say that it is still a major issue within the industry. However, Luke highlights that this is exactly the way it should be. Trust should always be the number one priority for advertisers and the industry at large, as it allows change to happen quicker and more fluidly.

This bleeds into the trend towards in-housing that has made headlines throughout 2019. The case for brands to in-house their digital marketing is not always a clear one, but the panellists argued that it doesn’t have to be a black-or-white decision. There are degrees of in-housing that brands can take advantage of and this is often where the sweet spot lies. Perhaps this involves owning the technology platforms, or the data that your agency are using; the specifics will depend on your brand’s unique needs.

Crucial to this is a great agency partnership; one where the relationship has become integral. The best work can be done when agencies are able to work closely with their clients and become a part of the team, rather than something external.

With the basics covered, advertisers can begin to handle some of the other challenges that might be on their radar. The main discussion point here? The quality of creatives and the overall user experience. GDPR has required explicit consent to cookies, but more often than not, those pop-ups are more annoying than the ads themselves, thus having a hugely negative impact on the overall user experience.

There’s a lot to be excited about that Luke and Anna were looking forward to as we move into 2020.

New formats for video through Connected TV will allow smaller businesses to lean in to video advertising, further opening up the video advertising space even on non-TV devices. On top of this, new opportunities are beginning to crop up as publishers begin to develop their own supply-side platforms, allowing advertisers to make specific creatives that are designed to talk to the unique placements; for example The Washington Post’s Zeus Prime. While this will require additional expertise in a space that is becoming increasingly specialised, it does unlock more personalisation options so as to continue to make ads as relevant as possible.

You Can’t Spell Christmas Without CSS

SEO Manager
We use cookies to personalise content and ads, provide social media features and analyse traffic. Information about your use of our site is shared with social, advertising and analytics partners who may combine it with other information you've provided.OKDeclineLearn more
Scroll to top