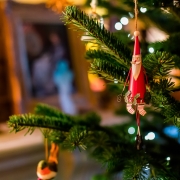 ‘Tis the season to be jolly’, and by that we mean the season to spend copious amounts of time (and tears) on YouTube, watching the best UK Christmas Ads the industry has to offer.

Christmas wouldn’t be Christmas without the barrage of Oscar-worthy advertisements, and whilst every year we see huge anticipation ahead of the festive campaign season, the pressure was definitely increased this year as retailers scrambled to release a video that would hit just the right tone amid the global pandemic.

Whilst some adverts resulted in backlash, others reduced viewers to tears. And to separate the sheep from the goats we thought we’d catch up with the Incubeta UK team to rank this year’s top 10 Christmas Ads.

Here are our favourite ads, ranked from best to worst (in our professional opinion).

1) Amazon: The Show Must Go On

Amazon definitely pulled at the heartstrings with this one as the campaign follows the story of a young ballet dancer whose performance was cancelled due to Covid-19. Starring ballet dancer Tais Vinolo, Amazon’s ad was favourite across the board as it channelled messages of family, community and personal identity (with a classic hint at young love). 93/100

Somewhat of a dark horse in the 2020 haul of Christmas ads but a winner nonetheless. Nimbus, the rather unknown mattress company, gave us all the festive feels with their heart-warming story of an old man who finds companionship in the form of a dog. Nimbus said the advert was made to highlight the plight of loneliness felt by the elderly at Christmas, and was inspired by previous John Lewis Christmas Adverts to promote the message of love and togetherness.

Whilst the content alone is enough to make one reach for the tissues, the marketing department deserves a round of applause for their ingenious SEO efforts – choosing to include ‘John Lewis 2020 Christmas Advert’ in the title. With the John Lewis ad averaging around 10 million views last year, Nimbus used this simple trick to propel themselves to the top of the results page, generating 263 thousand views – not bad for a brand with only 194 subscribers. 84/100

3) Disney: From Our Family to Yours

Disney’s ‘From our Family to Yours’ ad, is another one that’ll have you reaching for the tissues. The three minute animation tells the heartwarming story of a grandmother, her granddaughter and the family traditions that connect them through the years. Inspired by themes of nostalgia, cultural traditions and family, Disney’s Christmas ad is both touching and sentimental and marks their 40-year partnership with Make-A-Wish. 83/100

4) John Lewis: Give A Little Love

John Lewis did not disappoint this year, with their wonderfully appropriate ‘Give a Little Love’ Christmas campaign. Partnering with Waitrose, John Lewis’s 2020 advert demonstrated themes of kindness and charity throughout, comprising nine different vignettes and styles of animation, that were accompanied with a drive to raise £4 million for Fareshare and Homestart. Not only does the campaign pull at heartstrings , but it also supported the UK’s creative industries, through the various art forms that were used within the advert. 81/100

Up there as one of the most wholesome and heart-warming ads, Sainsbury’s ‘The Gravy Song’ does more than pull on one’s heartstrings. Centred around a phone call between a father and daughter who are discussing plans for Christmas, the ad acknowledges the fact that so many families will be separated due to the coronavirus crisis, in a sensitive and heartfelt manner. The ‘Gravy Boat’ song has definitely been added to our 2020 Christmas Spotify playlist! 81/100

Despite Coca-Cola fans across the country expressing their sorrow that the 2020 Coca?Cola Christmas Truck Tour was cancelled, the brand more than made up for it with this year’s Christmas advert. Coca-Cola’s campaign ‘The Letter’ follows the mission of a devoted dad to deliver his daughter’s letter to Father Christmas, and make her Christmas wish come true. The ad highlights that the magic of Christmas lies in personal connections and family – showing that time is the most precious gift of all. No dry eyes in the house. 77/100

The McDonald’s Christmas advert is an animated modern-day tale that reignites the magic of the festive season. Following the story of a mother and her young son (who is facing an internal struggle), the 90 second ad tells an emotional story of a mother desperately trying to encourage her teenage son to take part in valued Christmas family traditions and release his ‘inner child’. As always McDonalds – in the form of Reindeer Carrots – saved the day. 76/100

Switching things up with their ‘No Naughty List’ campaign, Tesco chose to navigate away from the norm of Christmas adverts, opting for a fun, playful and relatable campaign (that also encourages viewers to purchase Tesco’s Christmas merchandise). The ‘No Naughty List’ encourages viewers to disregard their previous misendeavours, and not think twice about treating themselves – after such a difficult year we all deserve a  Christmas pick-me-up. Be gone with the Naughty List, bring on the (Tesco own-brand) Christmas Cake. 75/100

Although somewhat inspiring, Papa John’s Christmas ad was a tad on the simple side this year. Partnering with Crisis and The Trussell Trust, Papa Johns ‘Giving More This Christmas’ campaign took a ‘DIY’ in-house approach, using pizza boxes and cardboard for props – giving all the money they saved from creatives and production costs directly to both charities. Although the campaign did raise substantial funds for Crisis and The Trussell Trust, and provided work for internal staff, (who designed and created the campaign assets) it didn’t quite tickle the fancy of the Incubeta team. Despite being the best use of a pizza box we’ve ever seen. 68/100

Returning for a fifth festive ad, Aldi’s infamous carrot Kevin is back battling distance, a snowstorm and a failed parachute to return home in time for Christmas. It may not be up there with the top players, but it does offer viewers a much needed break from the emotional overload that is festive advertising. Whilst people may have formed a connection with this lovable little root vegetable, the polls show that maybe it’s time Aldi shook it up a bit. Steven the Sprout for 2021? 62/100

ASO Optimisation
We use cookies to personalise content and ads, provide social media features and analyse traffic. Information about your use of our site is shared with social, advertising and analytics partners who may combine it with other information you've provided.OKDeclineLearn more
Scroll to top