It’s been a whirlwind start to 2021 for NMPi by Incubeta, and we’re thrilled to announce an exciting development, in the form of an Amazon Ads Optimization service, through Affiliate Partners, Awin.

NMPi by Incubeta & Awin have worked together to develop a bespoke service offering Amazon Ads optimization that can be reported and paid for on a CPA basis. This is a partner first for Awin, and NMPi by Incubeta is excited to be using our Amazon Ad’s expertise & knowledge to provide impressive results via this service.

We’ve spoken at length about making the most of Amazon Ads before, and our resident Amazon expert, Senior Performance Manager Peter Munton, has expressed his excitement for this new opportunity:

“This offering is an amazing service because it is the first of its kind, integrating paid Amazon advertising into Awin’s reporting system. This new service will enable the client to compare the performance of their Amazon campaigns directly alongside that of their current affiliates. We’re excited to see where this takes us and the success we can bring to clients’ campaigns.” 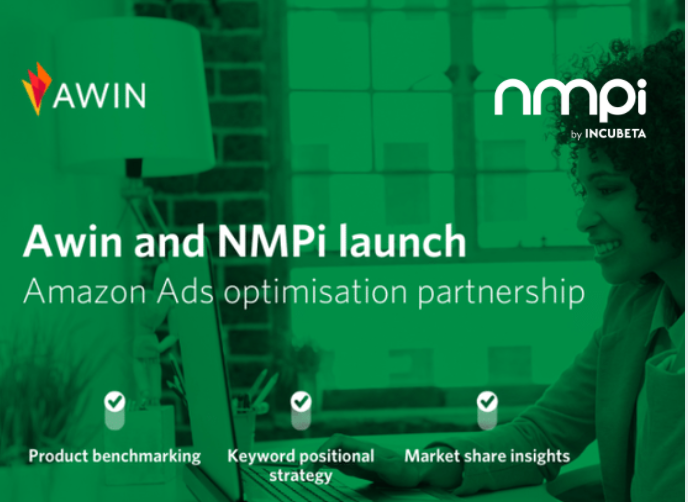 James Bentley, Awin UK Strategy Director, has explained more about this “huge frontier of opportunity and value” in Awin’s Blog about this new offering.

This particular partner-based service is currently being rolled out to Awin clients, but this isn’t the limit to our bespoke Amazon offerings! If you’d like to learn more about how to unlock your Amazon Potential with NMPi by Incubeta, register for a Free Personalized Amazon Report today

Blockchain has been poised as the next big technological disruption. It has already generated shockwaves in the financial industry with its decentralised network of transactions, an alternative to the current centralised model controlled by financial institutions.

From the Google search trends below you can see the rapid growth it has had in the past year:

But what are the opportunities for blockchain in the digital marketing industry? Before we dive into its possibilities, let’s wrap our heads around what it is and how it works.

Currently, the term “blockchain”, is synonymous with the cryptocurrency “Bitcoin”. Although both are related, they aren’t interchangeable, as blockchain is the fundamental technology behind the Bitcoin cryptocurrency. It is this technology that marketers need to understand to avoid losing ground to competitors in the years to come.

Don and Alex Tapscott, authors of Blockchain Revolution (2016) state, “The blockchain is an incorruptible digital ledger of economic transactions that can be programmed to record not just financial transactions but virtually everything of value.” 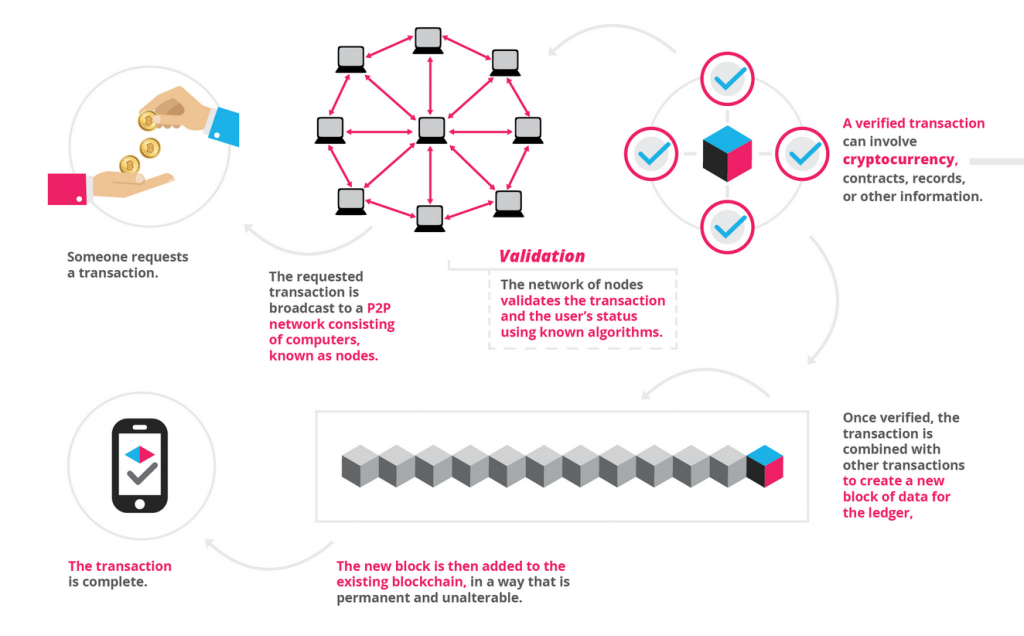 A useful analogy I use to describe blockchain is to compare it to Google Sheets. Where conventional processing involves an excel file stored on a single computer, with Google Sheets, you don’t need to wait for someone to finish editing a document, it can be maintained simultaneously across multiple people with no central data storage or no version control issues.

Unlike Google Sheets, where the data is ultimately stored at Google’s data centres, the blockchain is a decentralised and distributed database that isn’t stored in any single location, meaning the records it keeps are truly public and easily verifiable. This also allows data on the blockchain to be virtually impossible to corrupt since the entire network is needed to commit changes.

Blockchain Use Cases in Digital Marketing

In 2016, ad fraud (or invalid traffic) lead to $12.5 billion in wasted advertising spend. This year, it is set to increase by $4 billion. The growing discrepancy between what advertisers are paying for and what they get has adversely affected trust in digital marketing. Fortunately, ad-delivery can be audited by firms like Deloitte, though this is an expensive option.

Alternatively, a blockchain network can verify whether ads are being delivered and if they’re going to the right place. Decentralising auditing is cheaper and can work. In fact, Adtech company MetaX recently launched “adChain”, a blockchain solution that tracks ads using a distributed ledger, providing advertisers and publishers with a comprehensive trail of everything related to the campaign such as, how much was spent, who saw the ad, and conversion rates. This will ultimately allow everyone in the blockchain to acknowledge the impression event and approve it.

This level of data transparency alone strengthens adChain’s value proposition because it will enable advertisers to measure and optimise ad placements with unprecedented accuracy.

Brand safety concerns will also be a thing of the past, as brands and advertisers will know exactly where ads are being shown, and all publishers on the adChain network are hand vetted before any ads will appear on them.

Viewability may arguably be a greater issue than ad fraud. According to Google,  56.1% of impressions served across Google’s display advertising platforms aren’t viewed by a consumer. This has caused great frustration for advertisers who pay for ads that people can’t see.

To tackle this problem, a blockchain startup, The Basic Attention Project, founded by the inventor of Javascript and co-founder of Mozilla Firefox, has created a browser that monitors the activity of the user anonymously. The technology analyses the pixels being viewed, and time spent on-site, meaning advertisers only pay publishers when ads are viewed. All users on the network maintain full anonymity, creating a suitable equilibrium between privacy for the user and targeting for the advertiser.

The project is very ambitious and would require another article to be explained in its entirety. Here is a brief video that explains the company’s mission:

Today, users don’t “own” their data. The information a consumer puts into the likes of Facebook or Google is stored and used by these advertising giants, allowing them to make profits in the billions through managing and selling user data. What if there was no need for the middle men; and advertisers could have direct connections with the consumer? 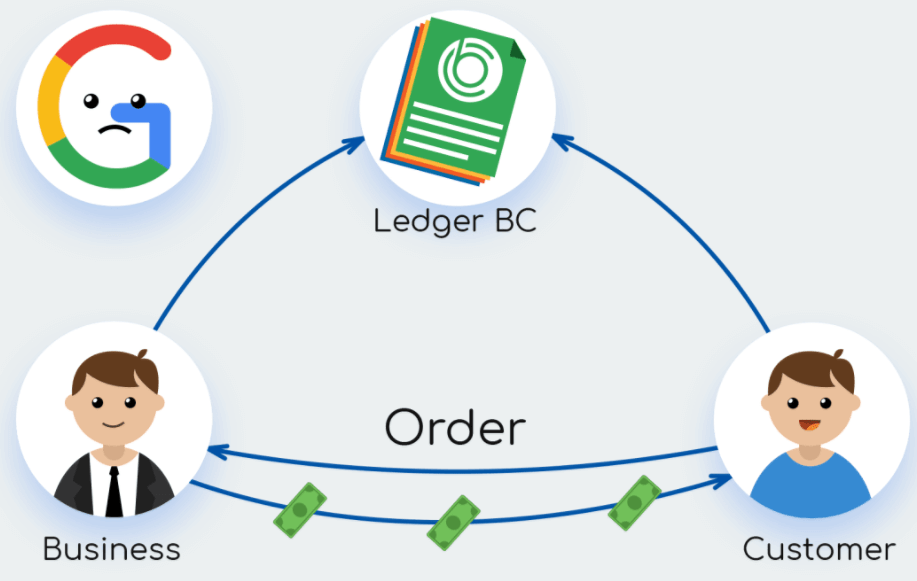 BitClave, a Silicon Valley-based blockchain start-up, is working on just that. The company’s goal is to enable a “decentralised” form of online search. Instead of using Google’s search engine and letting Google be the intermediary between the consumer and the advertiser, the consumer could search via BitClave’s engine and be paid for their own data. In exchange they will see targeted ads, leaving Google out of the picture. This new model not only reinvents the world of search but could also address the adblocking issue advertisers face as users would be less likely to block ads if they can profit from viewing them.

The implications of blockchain being utilised in the digital marketing industry make it seem as the panacea for some of the woes and pervasive issues in the online advertising ecology, however, the blockchain solutions discussed do have their limitations.

For instance, adChain requires humans to validate and agree on which sites should be whitelisted in order to prevent ad fraud. This may not be sustainable in the long run and will require some form of automation for the technology to be truly scalable. Additionally, The Basic Attention Project will require users to adopt a new browser, which could slow adoption rates as the majority of the internet is viewed through the likes of Chrome, Firefox, and Safari. If they could somehow offer the same functionality as a plugin, that would greatly improve the project’s chances for success. Lastly, BitClave is currently a small fish in a very big pond and without serious financial backing and support, it will struggle to take down Google’s established presence, especially if Google responds with aggressive innovation.

Nonetheless, blockchain and cryptocurrency pose significant advantages for marketers in terms of transparency, improving business performance and building customer trust. These reasons could suggest that early adoption of blockchain technology could make a significant difference for digital marketing.