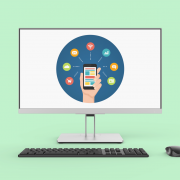 When Steve Jobs first unveiled the iPhone in 2007, few would have predicted just how ubiquitous a device it would eventually become, breaking all manner of sales records with well over two billion sold since launch. Just over a year later in 2008, Apple’s App Store was released, and apps themselves have seen a similarly meteoric rise as they became part and parcel of our digital lives.

2020 was something of a landmark year for the market – as the pandemic set in, there was a surge in usage as digital habits shifted dramatically. Total downloads hit 218 billion over the year, up 7% year on year, with some verticals, in particular, experiencing huge growth. Gaming was one such example, but this was also seen across a wide range of categories such as Education, Fitness, and Health as users sought to look after their physical and mental well-being.

There were two key trends that set last year apart; a marked increase in engagement, and consumer willingness to transact within apps. The average mobile user spent around 4 hours a day on their mobile in 2020 (up from 3 and a half hours in 2019), with 88% of that time being within apps specifically. Meanwhile, total consumer app spending reached $143 billion, rising by an incredible 20% year on year. This sets the scene of a market that is only set to grow over the coming years.

There is however a bump on the horizon that app owners will have to navigate – Apple’s imminent full rollout of the iOS14 update across their devices. Apple has long positioned itself as champions of user privacy in the tech world, and included within the latest version of their operating system is a fundamental switch in the way the sharing of user data is managed – opt in, rather opt out, will become the norm. Soon, all apps will be required to serve a notification that asks users to allow them to be tracked across other websites and apps or opt out. Predictions on the opt out rates are high, with some estimating it could be as high as 80%.

This has significant implications on app marketing – with the likely loss of a significant amount of user-level data weakening platforms that make use of highly granular audience targeting. There will also be a reduction in tracking capabilities, with downstream events beyond the install (such as sign ups, in app purchases, and purchases) becoming less reliably tracked.

So where does this leave advertisers and agencies looking to map out their future app strategy, but faced with increasing uncertainty when it comes to tracking? A performance model is one logical route that advertisers can take to help them navigate this new landscape. By working under such a model, app owners can minimize their own risk, whilst ensuring that they pay out commission based on the value that they assign to installs, subscriptions, or revenue.

Another important consideration that advertisers will need to take is their choice of channel mix.

Apple’s own Search Ads platform (ASA) remains relatively unchanged amidst the upheaval, making it an increasingly attractive channel for advertisers to shift budget towards. ASAs allow for the placement of ads directly within Apple’s App Store, and unlike other channels that often make use of audience targeting options reliant on highly specific user data, ASAs are primarily contextual and intent-based – the ability to generate high value installs is driven primarily through the targeting of highly relevant search terms via keywords. These keyword targeting capabilities, in tandem with a pool of users whose presence on the App Store indicates they are actively in-market, means conversion rates for installs can often be close to 50%.

Organic acquisition on the App Store is also a channel that advertisers should refocus their efforts on. In a post iOS14 world, App Store Optimization (ASO) will also become increasingly important as a safe and reliable source of users and installs.

The close alignment and integration of paid and organic efforts across ASA and ASO will be crucial to setting up a successful long-term strategy. At NMPi, our approach is to consider the channels as two sides of the same coin. A strong paid campaign can have a direct impact on boosting organic rankings, therefore close monitoring of both channels is important to fully measure the success of your marketing efforts. A joined up reporting approach, comparing organic and paid performance down to the keyword level, can help provide a holistic view to ensure ad spend is being allocated as efficiently as possible.

Unveiling Incubeta’s New Brand Identity
We use cookies to personalise content and ads, provide social media features and analyse traffic. Information about your use of our site is shared with social, advertising and analytics partners who may combine it with other information you've provided.OKDeclineLearn more
Scroll to top
×