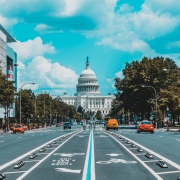 After nearly two weeks  of vote-counting Joseph Robinette Biden Jr. is likely to be elected the 46th president of the United States, denying Donald Trump a second term in presidency, and making history with Senator Kamala Harris of California – who, amongst other firsts, will become the first woman to serve as vice president.

The 2020 presidential election recorded the highest voter turnout in over 120 years, as previously firm republican states edged blue in a bid to remove the current incumbent populist president from power. Barring recounts and valid legal challenges the results are now in, the outcome has given marketers a further ‘philosophical quandary’ to consider as the U.S. faces one of the deepest societal divides in their history.

Marketing to a polarised customer base will be the least of their worries, and while it may seem trivial to analyse how the election might affect marketers, Biden’s victory will likely mark the start of a dramatic shift in America’s recent attitude toward the world, which will undoubtedly have a widespread impact on both the the media industry, and advertising as we currently know it.

The initial priority for the Biden administration will be the eradication of the coronavirus pandemic and kick starting the economy back into action. A process which will fundamentally cause drastic shifts in consumer behavior. As Biden tries to control the virus, we’ll likely see an increase in country wide initiatives combined with state-specific lockdowns, including varying degrees of restrictions being introduced across the US. Although many advertisers may view this as an opportunity to showcase their digital literacy, even large-scale corporations aren’t immune to the pandemic pressures, and accompanying Biden’s plans to squash the virus, will be an increase in conscientious marketing across the industry.

How advertisers reach potential audiences during such uncertain times is a challenge in itself as lockdown restrictions will only heighten consumers’ awareness of brand messaging. The challenge many will face will be establishing a genuine set of brand values that are reflected at the heart of the company. Jumping on the coronavirus bandwagon with shallow or insincere messaging that disregards consumer emotions would only damage one’s image beyond repair. Going forward we will likely see changes in ad content and messaging, as brands tap into heightened levels of social consciousness, choosing to speak authenticity in their campaigns.

Ad targeting has been a hot topic of conversation for both the Republicans and Democrats over the last year, as targeting and tracking practices have become front page news and the feature of many a legal battle. With research showing that, on average, US advertisers spend 20% of their marketing budgets on user identification and ad targeting, the new government will certainly try to regulate and control this area of digital advertising.

As it stands the US has yet to pursue a federal privacy law akin to Europe’s GDPR (California have taken the lead here with the CCPA), but as technology continues to change and develop at a rapid pace and consumers vocalise their demand for increased data security/stricter privacy laws, the government will likely address user protection issues in congress and tighten the grip on data protection practices. That may however be easier said than done. Historically speaking, the Republicans and Democrats do not align when it comes to data privacy; the Democrats are advocating for a rigorous government controlled structure, while the Republicans favor a more muted approach to federal regulations. This means – taking into account that the Democrats are unlikely to receive a Senate majority – that any bill on privacy regulation and data protection will be challenging to pass. That being said, although differing opinions of each party, and a split Congress, may slow the passage of a privacy bill, the demand for a federal privacy law is ‘inexorable’ and the US should expect to see regulatory changes in the next coming months. So what will this mean for advertisers?

Personalised advertising is the golden ticket of digital marketing, and over the past decade alone marketers have funnelled millions of dollars into data activation solutions and audience identification. While the measurement of targeting may have improved fourfold, the introduction of privacy laws will seriously limit advertisers’ new found ability to personalise ad messaging. As regulations are rolled out, platforms and regulators will be forced to improve their data privacy and protection practices, which inturn inhibits advertiser’s access to third-party data and addressable advertising. Moving into 2021, marketers should be preparing themselves for the inevitable introduction of stringent regulations in a tactful and strategic manner.

While there may be a rising consensus for the tightening of antitrust laws, with a split Congress we are unlikely to witness any drastic changes to the current legislative monopoly definition or existing antitrust laws. Although a full Democratic Congress would have seen a more aggressive policy regarding Big Tech companies (who’ve previously avoided sweeping antitrust regulation), we’re more likely to see a gradual approach with minimal changes to the existing laws, and an increase in tool availability for the Department of Justice.

That being said, VP Elect Harris’s relationship with Silicon Valley will undoubtedly play a part when the Democrats bring certain issues concerning Big Tech companies to congress, and we can expect to see a real change in the accountability of these companies, as she uses her prior relationship with them to level the playing field for small independent businesses. Going forward, forcing Big Tech companies to compete on an even level will result in lower ad costs, greater transparency, and more innovation for advertisers.

NMPi by Incubeta Wins at the DADI Awards
We use cookies to personalise content and ads, provide social media features and analyse traffic. Information about your use of our site is shared with social, advertising and analytics partners who may combine it with other information you've provided.OKDeclineLearn more
Scroll to top